14 Ways to Tell If Someone is Genuine or Fake

It matters who we spend our time with. No one wants to be around someone who is faking it. We want sincere, genuine and truthful people in our lives. Is there someone in your life that you wonder whether they are the real deal?

Here are 14 ways to tell if someone in your life is genuine or fake. 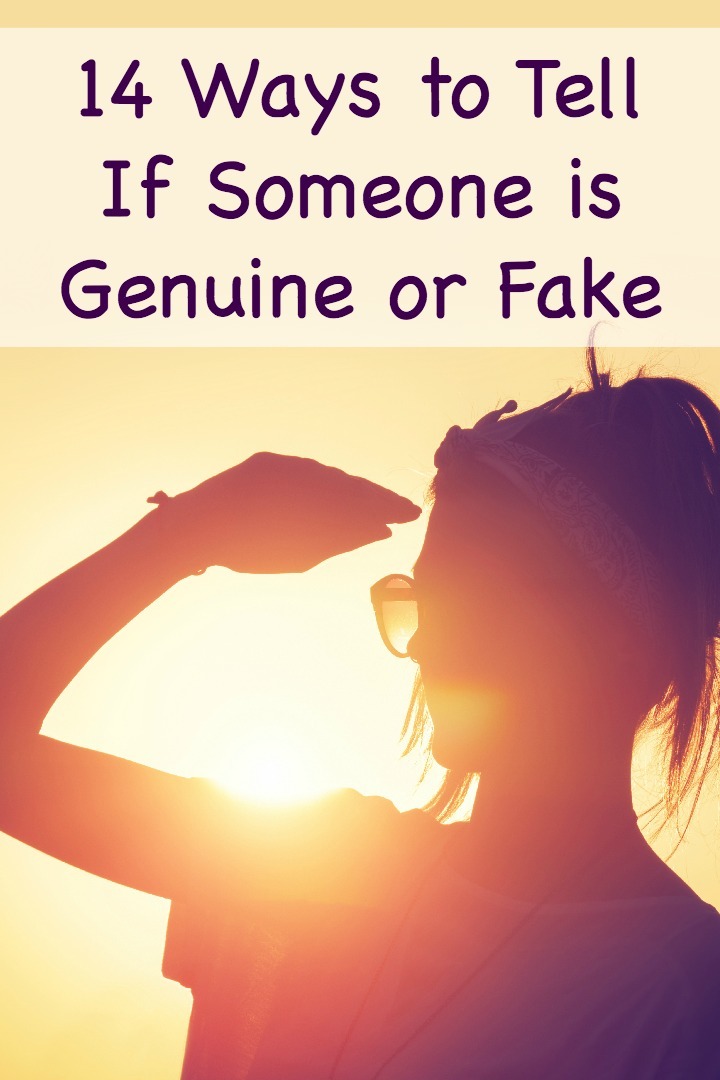 1. They have solid self-esteem.

Genuine people are not overly modest but they’re not boastful either. They are confident in who they are. They don’t seem very worried about impressing others because they are really truly solid in their own self-esteem. They don’t need to brag and they also don’t talk down about themselves either. They are straightforward about who they. The come across as authentic.

2. They are not easily threatened.

They know their values and beliefs and because they are so sure of them, they don’t get threatened when other people try to attack them. They remain cool and unconcerned.

3. They give and receive compliments.

When someone has low self-esteem, it is hard for them to give and receive compliments. Genuine people, on the other hand, like to create genuine connection through the exchange of sincere compliments. When someone compliments them, they thank them. Likewise, they don’t hold back to let someone else know what you appreciate about them.

5. They are not judgmental.

They let others be who they are. They have no agenda and they don’t try to change others. They know the importance of being authentic and they understand that everyone is on their own unique journey in life.

6. They don’t purchase lots of stuff.

For a genuine person, their possessions don’t define who they are. They are not motivated to purchase things to create happiness or self-worth. They value relationships, creativity and stress-free living.

7. They tell you the truth.

A genuine person concerns themselves with the truth more than hurting other people’s feelings.
It doesn’t mean they go around voicing negative opinion. Rather it means that when in a situation where the truth should be told, they do it. They don’t sugarcoat because they’re worried about the other person’s feelings and they don’t make up lies to try and save someone else’s feelings. They give the other person credit that they can handle the truth, and that’s what they speak.

8. They allow themselves to be vulnerable.

Today’s world is rough and it can be hard when someone’s weaknesses are exposed. Genuine people, however are okay with exposing their imperfections and they definitely allow themselves to be vulnerable. This is how they experience life more deeply. They realize that opening themselves up to their fears helps them to learn and grow into their best self.

9. Their words and actions are consistent.

When they are in a conversation with someone, they are present and they listen. Genuine people focus on what they are communicating.

11. They admit when they’re wrong.

Genuine people are honest about their shortcomings. They don’t pretend to be perfect. They allow themselves to be vulnerable by admitting when they’ve made a mistake and when they’re wrong. They seek to make amends rather than to be right or to know it all. Genuine people view their mistakes as a chance to become better. They also accept who they are and take responsibility for it as well.

Genuine people make decisions and move through life based on your inner voice and not based on the expectations of others. They don’t care about what is considered “cool” or “trendy” unless of course, it’s something they genuinely like. Genuine people stand behind their values and beliefs and are guided by them rather than outside sources.

13. They don’t care about whether they’re liked.

Genuine people don’t take themselves so seriously that they don’t become offended easily. They let criticism roll off their back, unless of course, they can use it to improve themselves.