6 Signs You’re With The Wrong Person

Sometimes you think you’ve already found “The One”; but if you’re still searching for signs that you’re actually with the right person and not Mr. or Ms. Wrong, this is a sign…

Here Are 6 Telltale Signs You’re With The WRONG Person 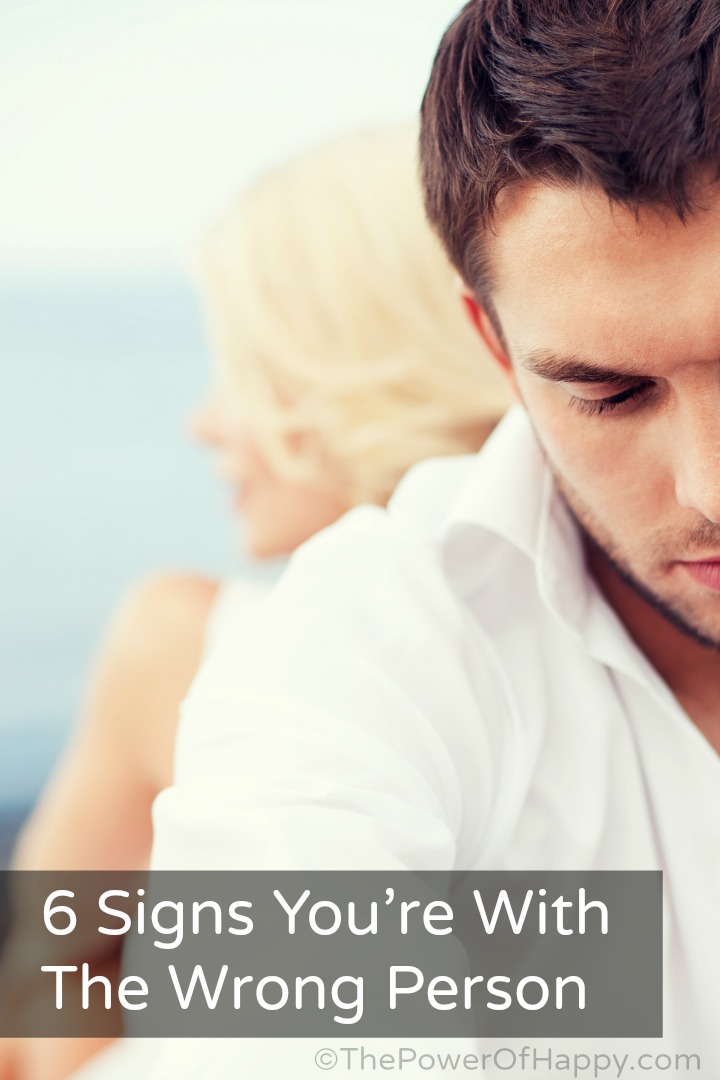 1. He/she doesn’t go with you to events that mean a lot to you.

The wrong person may have a good excuse for not being able to go your event, like being actually sick, which is understandable, but when you start seeing a pattern of no’s and “excuses,” it may be time now to move on.

So long as you’re not overly demanding, events that are important to you should also be important to your partner. If he or she is not showing any interest, then it might be a sign of him/her not being that into you or that he/she prefers other things or people over you.

Note: This may also mean that the person is just too self-centered to give some of his/her precious time for you. Better notice the signs and decide whether you think you deserve more attention.

Recommended: 5 Tips for A Happier Relationship (Backed by Science)

2. He/she always makes plans only at the very last minute.

It’s pretty obvious that you’re with the wrong person if you pop into his mind only after no other plan for him comes along.

There are people who keep their options open, with several choices available at their disposal, and they don’t commit to a date too soon, thinking that something better might come up. If you often find yourself waiting on the line for his call, this is a sign that you are his LAST option. It might be time to call it quits.

3. He/she is not actively making efforts to be part of your world.

If someone is dead serious about your relationship, they are expected to make the effort to get to know you more, the world you live in, or the people in your life. They will show you their eagerness to be part of your life. They would also like to present themselves as your SERIOUS boyfriend/girlfriend to your friends and family members and would even do their best (or at least try) to create a good impression to them.

If the person just doesn’t care one bit about doing that, then it is a sure warning sign of disinterest or plain carelessness.

4. Night life is still the life, even after you’ve already been dating for a long time.

For some people, the night life is simply their way of life even after you’ve already been dating for a while. If night life is your (permanent) way of life, too, then you may have found your soulmate. Lucky for you! However, for most couples, it is only during the start of the relationship that they tend to go out often and stay late together to party. You will feel though later on that once you settle in with a serious date and get closer into the relationship, you both  seem to lean towards quieter nights at home and special home-cooked dinners. If you feel that it should have been this time already in your relationship but it’s still not, then it could be a sign to move on.

If the person you are dating still likes to party with other people, maybe it’s just the way he/she is and you can’t change that. It’s definitely time to move on. You obviously want different things now so accept that you will have to let him/her go so that he/she could continue exploring other “fish in the sea.”

5. You never see each other more than once (or twice) a week, even after you’ve already been dating for months.

Unless he or she has valid reasons, the right person would always want to spend more quality time with you, otherwise, he/she is just taking you for granted or playing you as his/her toy number 4. On the other hand, some people are just lovers of their own time alone (Introverts), however if that person is obviously not enjoying your regular time together WHEN it happens no matter how infrequent, then it could be a warning sign.

If the person you are dating for some time still loves going out with his single friends doing “single things” together, then it means he/she is simply not ready to give up the single lifestyle. It could be a serious warning sign if you want an exclusive, steady relationship.

Also, although you don’t want the person to give up his/her close friends entirely, if it turns out that they are the main source of his/her leisure time, then it could mean you are not too much of his/her priority–unless, of course, if you are invited to also hang out with the besties. Nonetheless, you still need some quality time ALONE together so friends shouldn’t be a hindrance to that.

At the same time, if it seems like your BF or GF has a lot of single friends of the opposite sex that he/she still likes to hang out with/ stay in close contact with, or simply keep in touch with too frequently, then it’s a definite cause of alarm–a sign that you’re with the wrong person!