8 Harsh Truths About Life That Are Hard To Admit

You’ve undoubtedly heard the expression that truth hurts. That’s because it’s true. Most of us spend more time and energy denying the truth rather than facing it head on and trying to fix what’s broken.

When you are really ready to take full responsibility of yourself and focus on personal growth, addressing the harsh truths below will get you started on the right path. 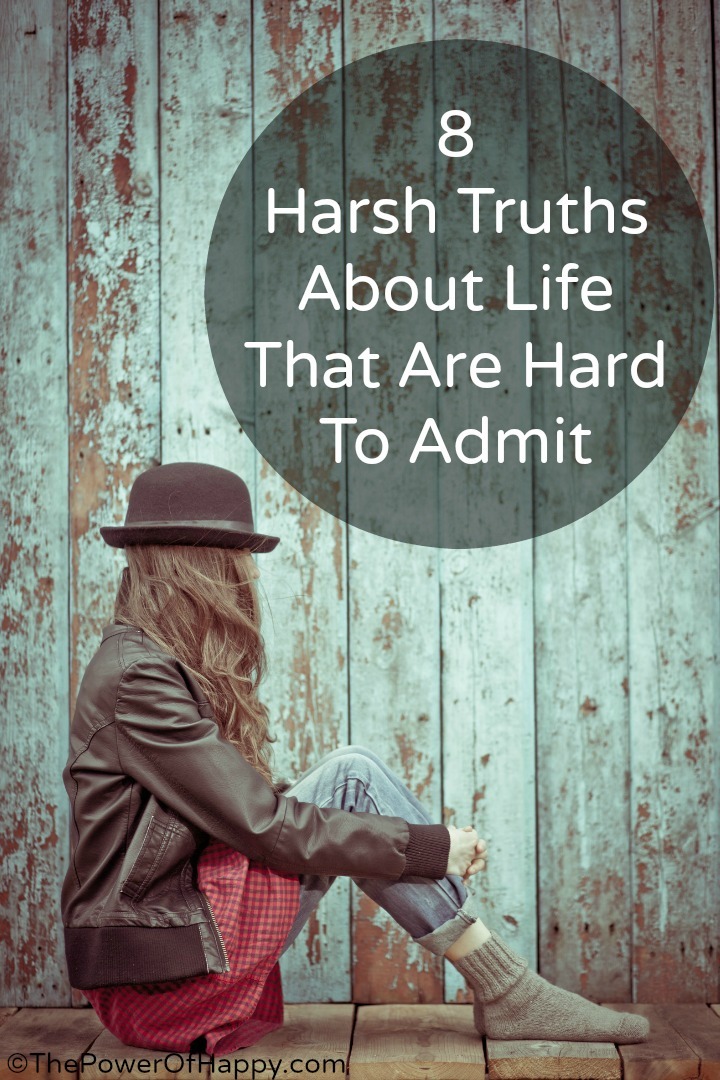 1. There Is No Right Time

If you’re always waiting for the “right” time to do something, you will never do it. Period.

We like to tell ourselves there is a right time for things, whether it’s getting back to the gym, eating better, finding Mr. or Mrs. Right, having kids, or just about anything else that involves making a lifestyle change. In truth, we put it off out of fear: fear of change, fear of failure.

Failure is a word most of us find scary, which is also why we find ourselves waiting for the right time. The truth is, if you want to pursue goals, you will likely fail at one time or another. You might fail an awful lot even before you succeed.

Ultimately all the failures will make your success that much more meaningful. It sounds cliché, but each failure is a chance to learn something—about yourself, about the process, about the thing you’re striving to reach—and use what you learn to be better.

Failure is just another way to say “continuous improvement.” If the failure really hits you hard, give yourself a little break. Take a day or two to do something you enjoy, read a favorite book, have dinner with a friend, just something to disengage and reset. Taking a little space may even give you the insight you need not to fail on the next go.

3. There May Be No Tomorrow

It’s a little macabre, but tomorrow isn’t guaranteed. If you put off doing things, waiting for the right time, remember, it may never arrive. Steve Jobs once said that knowing he’d be dead soon helped him realize what was truly important, and he no longer felt hindered by things like fear and pride.

The unexpected happens. While you can’t just jump on a plane and travel forever (unless you win the lotto), do the best you can to stay in the present and always take a step towards the goals you’re trying to achieve.

No one wants to admit to being lazy. Instead we find ourselves saying things like “I don’t have time” and believing it. According to the Bureau of Labor Statistics, we spend just over 4 hours a day on leisure activities and almost 3 of those hours are actually spent watching TV.

The next time you feel like you don’t have the time for something, turn the TV off and keep it off for a few days. Unless you’re watching educational shows and inspirational talks, you’re probably not really generating anything of value during that time or bettering yourself as a person. Use the time instead to prepare healthy meals for the week, read a book, write a book, exercise, reconnect with an old friend, or meditate.

It’s okay, you can admit it. Admission is the first step to fixing it. Actively try to open your heart and your mind. Instead of judging someone, try to learn from them. Ask questions to better understand where they’re coming from, then really listen to what they have to say. Be humble about your own story, even if you’ve got a great one and wound up incredibly successful. Do your best to be both student and teacher. With everything going on in the world, the last thing we need is more judgment. This also extends to people we don’t see eye to eye with.

People are different. That’s just human nature. It’s okay to disagree and have differing opinions, but celebrate these differences instead of being condescending. This comes right back around to being open to listening to others and sharing your own stories as well.

So we’ve hit some of the really negative truths about ourselves. For most of us, focusing on other people’s weaknesses, especially those closest to us, make us feel better about ourselves. Ultimately, this just makes us feel worse about ourselves. Instead, compliment others. Offer your support and encouragement. Not only will this build your own character, but you’ll really be able to have a positive impact on those around you.

This is also why we find ourselves gossiping. Sometimes, it’s easier to focus on the drama in other people’s lives because it makes us feel better about whatever we have going on. Next time you find yourself hanging out with people who are gossiping, try to contribute something positive to the conversation instead. And remember, however people are gossiping around you is also how they will gossip about you when you’re not around.

7. Getting Even Isn’t Getting Ahead

When we feel we’ve been done wrong, we have the overwhelming feeling to get even. But getting even or getting revenge isn’t how you get ahead. Focusing on getting even just means you are wasting energy on something that doesn’t matter in the long run. Instead, focus on getting ahead.

Let go of whatever negative feelings you’re holding onto and move forward. More often than not, this is the best revenge.

How often have you heard someone say, “Well if so-and-so did this, I would be better off.” The hard truth is no one is responsible for you except for you. You control your own happiness, your own success. It’s easier to blame others than to look inward and identify the real problems, but until you do, you will never truly feel as happy as you want to feel and be where you want to be.

It’s true–it’s hard to admit these 8 harsh truths about life, but we all know they can help us become much better persons.